Who Are THEY and How Is It THEIRS To Give?

I am re-reading The Gulag Archipelago by Solzhenitsyn, a book I have not read since high school (not surprisingly, as this is not a book most people read more than once. It's about the the Soviet prison system and how it was used to terrify and controll the population....not a cheery topic). In the first chapter, he points out that when people were arrested, they were submissive and never cried out. They were being arrested without cause but they just accepted it in hopes that it would all be straightened out. After all, they had done nothing wrong. It reminds me of my Word of Faith experience. Because we were so afraid of being blackballed as "Offended" that no one drew attention to questionable situations or cried out that they were being mistreated.
So just a little reminder: If "they" are going to tell you that you're offended for asking questions or that you are disrespecting the man of God by doing so, how is it their right to set the rules? After all, anybody can say "God told me so." How is holding them accountable a right that they can give and take from you as they please?
Why do you have to accept being controlled?
Posted by GW at 1:13 PM 4 comments:

Unresolved Chicken Soup for the Soul

Brant Hansen has a blog called Letters from Kamp Krusty.

Unresolved Chicken Soup for the Soul

There's a story about Bach -- or maybe it was Mozart -- and how, even as a little kid, he had to hear resolution. He was in bed, upstairs, and someone was playing the piano, and that someone got distracted and stopped, just before the last chord.

J.S. -- or W.A.? -- couldn't stand it. He tromped downstairs, pounded out the resolving chord, and then went back up to bed again, without a word. He just had to hear it.

We're all like that. I think about all the stories I've heard, and then all the ones I've lived, and there's the big difference: We get resolution in the former, but the other just...lay...out there, somewhere, and, much as we pretend, there are no finish lines, no final chords, no official victories, no ends-of-story. Not yet, anyway.

I took the yellow bus home from our country school in St. Berniece, Indiana. One day, I sat with my best friend's brother, Eric. He was in second grade, I was in third. We talked and joked about my lunchbox and a puppet I played with. Then we got off at the bus stop in front of his house.

I stepped to the right. But Eric ran alongside the bus, slipped, and fell under the wheel.
Two weeks later, my mom suggested I go over to my friend's house, to visit him and his little sister. She told me they probably hadn't had any visitors since Eric was killed, and may be lonely. So I got on my bike.

Mark, my friend, and his little sister met me at the door, excited to see me -- or anyone, for that matter, I gathered. We laughed and played with a top on their hardwood floor. It was one of those that spins and makes noise and lights. I could see their mom in the back room, smoking a cigarette. Staring at me.

We played for an hour, until she came in the room, and started screaming at me. She said something about how all I was doing was reminding them of what happened to Eric, and I should get out, like, now. Her kids were stunned, and started crying, and so did I, and I ran out the door and got on my bike bawling with guilt.

I never went back. And we moved away. I don't know what happened to them. When I think about that day -- this is almost thirty years ago -- I still get a knot in my stomach. There's no ending to the story. So it's a story I've almost never told.

Most examples aren't this painful, but almost all the "great stories" of my life are this way. When I speak to people, try to motivate them, try to teach them, I pull a bit of a sleight-of-hand, presenting stories that are edited just-so. They're not "untrue", they're just dishonest, in a pedestrian way, I suppose, presenting real-life stories like Aesop's Fables, with certain resolution, as though the story were over.

(Maybe -- I don't know, I'm musing here -- this is a reason why Jesus's stories aren't specific "victory" testimonies, they're metaphors of the Kingdom. Maybe he didn't want a specific "Look-at-what-happened" story to ultimately get mis-used, or give the wrong impression.)
I tell about a smashing, eye-opening missions trip for some high schoolers, but I don't include the boring stories, or the stories where some kids just really weren't impacted, how that one inspiring kid wound up getting some girl pregnant two months later. I tell -- and hear -- "and then he became a believer!"-type stories, but don't include, " -- and yeah, okay, he's still battling addictions."

I read "look what our church is doing" accounts in newsletters, but don't hear the invariably messy follow-ups. We get the "victory" stories over sin and depravity, but no one publishes books called, Wups, I'm Totally Messed Again. Yet, that's where the stories of my actual life are. We don't like our stories open-ended. So we clean up our stories, and act like they're finished.

I used to be a youth minister, and the conventions would feature one impressive guy after another, with remarkable stories about what happened in their youth groups. It was really amazing! Why was my youth group kind of a mess? Why wasn't I inspiring anyone like that? It was impressive!...until I realized I could pick and choose stories, make believe they were final, and, presto -- I'm awesome.

And that inspiring day when Big Joe the Football Lineman cried and prayed? Well, that was the end of the story! But in reality, it wasn't.

We like resolution. But we don't live in resolution-time. Forgive me for ever giving the impression otherwise, that I believe myself fully resolved, fully arrived, somehow finished. The story isn't over.

Not everything makes sense, not everything gets explained, not every story is inspiring and ready for Tony Campolo to tell it. Talk about "inconvenient truth": We're living in the in-between.

I think about Eric, his mom, or a thousand other people I've known, and I feel like I'm lying upstairs, and someone just left the piano bench, right before the C chord. I'd walk down and play it, if I could.
Posted by GW at 4:00 PM No comments: 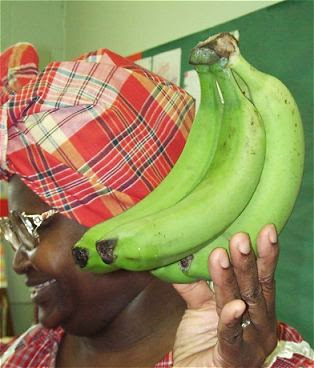 It's funny the things that remind you of the past. I happened to notice some green bananas on a table of fruit in our house and was reminded of Charles Capps coming to our church in the late 1990's. He was preaching from his then-recent book End Time Events. I remember that although he said he didn't want to set dates on Christ's return, he wouldn't be buying any green bananas. It was meant to be a humorous comment, even though he all but said that the year 2000 could see the return of Jesus based some kind of mathematics involving the Jewish calender. There was much "year 2000" speculation amongst WOFers during 1999. Kenneth Copeland and Capps were on Believer's Voice of Victory at length discussing the topic. Everytime the topic was preached on, everyone would say "Now, we aren't setting dates here..." and then make reference to the book that gave reasons why Christ would return in 1988. After that disclaimer, they would go on to speculate on what big thing could be coming in 2000 (apart from Y2K hysteria).

It makes me think of all the failed prophecies I heard in the WOF. Anyone remember Oral Robert's "Wake Up Call" discussed at length by the Copelands and Billye Brim on BVOV? Remember Jerry Savelle's interpretation of a prophecy given by Kenneth E. Hagin Sr. during a family holiday dinner regarding 1996 through 1999. It was the beginning of a trend of annoying rhyming prophecy slogans: "1996 The Year of the Fix, 1997 Will Be Like Heaven..." (He also said 2000 would see miracles like we've never seen. I thought 2000 was a big letdown.).

I also remember a prophecy our pastor gave that was printed in the church bulletin the year we left. It was all glory and money and heaven, nothing real specific. Funny enough, the only spectacular thing that happened at our church that year was the exposing of a scandal that caused most of the congregation to leave and has resulted in one prison sentence (so far).