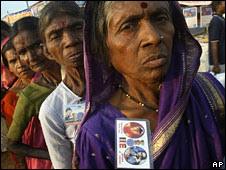 Our pastor fancied himself quite the prosperity preacher, too. He would tell stories from the pulpit of how well his prosperity messages were received at headquarters and his various speaking engagements. At this period of time in the late 90's, church services might culminate with a preacher's coat pockets literally being stuffed with money as the congregation spontaneously brought checks and cash to their feet en masse.

At the time I had no qualms about such behaviour. As a preacher's kid myself, I had seen family members treated poorly and taken advantage of. I knew some preachers who had sacrificed a lot and needed to have their coat pockets stuffed with money (still do).

In hindsight, it's hard to imagine that putting so much emphasis on money could ever have a positive outcome. It's almost funny the logic at work in our church: you have faith, you exercise your faith through words...confess what you want and you'll have it. What you do? Confess and believe yourself into a better financial position!

Then we make another assumption, that the people in our church who have more money got it by applying their faith (not by hard work, talent and life circumstances all possibly combined). So who are the most spiritual people in church? People who have money. And as your ministry grows, who becomes your high-value segment of the congregation? People with money.

Now no one in our church believed that money was a sign of spirituality. The pastor even decried such thinking from the pulpit. But in practice there was a caste system in place that became more obvious as our church grew out of it's old facilities into a shiny new building and campus. It was also obvious in the behavior of some (though not all) of the more exalted members of the congregation. At the top of the pyramid was the pastor and his family, then the people with money. The third group was those who worked the volunteer positions. At the bottom were the people who were poor or disadvantaged. Sounds mixed up? It is. If you were on the lower levels of the caste system, you were bound to feel inferior.

For years we could not believe that the caste system we saw in action was real. After all, we were hearing exciting things about faith, about the power of God, about the place God had for all of us at this church. Our pastor seemed to possess wisdom beyond his years. We thought maybe we are the ones who didn't get it. So we ignored a lot of things and carried the water for our church in order to be spiritually mature.

Eventually the love of money was one of the 2 things that was our old church's undoing (more on that later). What kind of Christian place of worship would encourage such thinking? I stopped inviting people to our church because of the treatment they would would likely receive. What kind of Christian leadership would exploit such a system for their own gain? My experience has been that the prosperity message breeds an attitude of inequality amongst congregants that only benefits those who promote this message.
Posted by GW at 6:06 PM