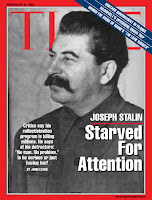 The Power 2 Serve website has a great article on Narcissistic Personality Disorder called Narcissism In The Pulpit. The details of the article may remind you of the pastor of a controlling church you have attended.

He keeps reminding you from the pulpit what a good teacher/leader he is....but nobody has heard of him.

When faced with a personal problem that you need his council on, he snaps "What do you want me to do about it!?"

He removes associate ministers from the church that become popular with the church family.

He does not conduct funerals unless he absolutely cannot get out of it.

He thinks people will lose their blessing if they don't get a chance to donate to his ministry.

He only accepts correction from ministers of equal anointing or higher, so don't even think about it.

He doesn't visit people in the hospital unless he absolutely can't get out of it or God tells him to go, which is not often.

He tells stories from the pulpit of people who were healed through his prayers and none of them go to his church.

He removes associate ministers who can preach as well as he does.

He is rarely seen in the company of low-income congregants.

He believes you should compete against each other to 'get around his anointing.'

He feels his adult children are owed big church salaries despite their lack of experience at, well.....everything

He returns from headquarters and hints how he corrected their doctrine, taught the leaders back their own sermons to them and was generally Joe Cool when he was there.

He becomes VERY upset if you don't call him by his title.

He tells you that as your pastor he is your 'anointing connection.'

He thinks sneering at pastors of smaller churches is acceptable.

He hints that higher profile ministers come to him for advice.

He tells you outright that all his peers come to him for advice.

He maintains he is the one that God sent to preach his favorite doctrines to the area: he's God's man for your town. Someone preaching a similar message in the area is not God's man for the area.

He competes with other ministers to be top dog in the eyes of those he admires and imitates.

He believes the type of ministry he does (teacher, prophet, etc.) is the most important.

You may NOT ask how money is spent in the church.
He regularly suggests there are other preachers/congregants trying to undermine him.

Congregants are charged for copies of his Sunday sermons.

He cannot take a joke. And if you try to tease him, he MUST retaliate.

He feels that the church is riding the coattails of his faith.

Match each of the above examples with the characteristics taken from Narcissism In The Pulpit below. There are no wrong answers.

You are welcome to post comments of other examples of "Your pastor might be a narcissist if..."

1. Feels grandiose and self-importance (e.g., exaggerates achievements & talents to the point of lying, demands to be recognized as superior without commensurate achievements).

3. Firmly convinced that he or she is unique &, being special, can only be understood by, should only be treated by, or associate with, other special or unique, or high-status people (or institutions).

4. Requires excessive admiration, adulation, attention & affirmation - or, failing that, wishes to be feared and to be notorious (narcissistic supply).

5. Feels entitled. Expects unreasonable or special & favorable priority treatment. Demands automatic and full compliance with his or her expectations.

6. Is "interpersonally exploitative", I.e., uses others to achieve his or her own ends.

7. Devoid of empathy. Is unable or unwilling to identify with or acknowledge the feelings and needs of others.

8. Constantly envious of others or believes that they feel the same about him or her.

9. Arrogant, haughty behaviors or attitudes coupled with rage when frustrated, contradicted, or confronted.”
Posted by GW at 5:10 PM